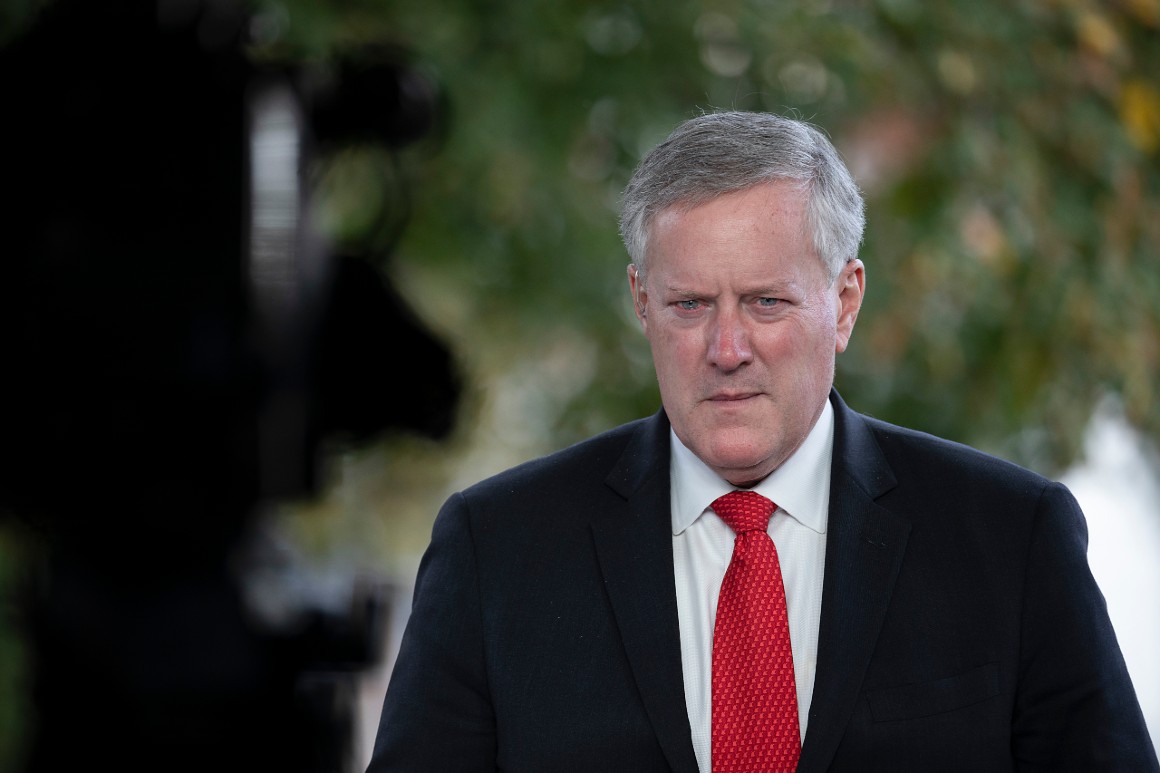 Nine days out from a critical election that will determine whether voters will “Keep America Great” by reelecting Trump or “Build Back Better” by promoting former Vice President Joe Biden, the coronavirus is dominating the presidential campaign.

“This wasn’t a slip by Meadows,” Biden said in a statement. “It was a candid acknowledgement of what President Trump’s strategy has clearly been from the beginning of this crisis: to wave the white flag of defeat and hope that by ignoring it, the virus would simply go away. It hasn’t, and it won’t.”

Even on Capitol Hill, Senate Republicans were forced to address Meadows’ comments. The chamber was in a rare Sunday session to hold a procedural vote on Amy Coney Barrett’s nomination to the Supreme Court.

In the upper chamber, senators and aides alike wear masks and practice social distancing. Senate Majority Leader Mitch McConnell (R-Ky.), in particular, has been encouraging such measures, and he recently said he has not entered the White House complex since August because of the lax adherence to public health guidelines.

Sens. John Thune (R-S.D.) and Roy Blunt (R-Mo.) disagreed with Meadows. Thune argued that “we all have control.”

“And we all have a responsibility as leaders to set an example that consists of doing the right things to stop the spread, and I think that’s encouraging the wearing of masks and encouraging social distancing,” said Thune, the Senate majority whip. “We all know that stops the spread. Science proves that.”

“It’s all over the world, guys,” Graham said of the virus. “I mean, you’ve had every model from herd immunity to lock the whole world down, and it’s still a problem.”

In a nearly 20-minute interview with Meadows on CNN, Barrett’s name didn’t even come up on Sunday, even though Trump’s nominee is just a day away from being elevated to the Supreme Court.

Instead, Meadows was constantly confronting questions about the coronavirus, including how many staffers inside the White House have tested positive or reported symptoms over the last week, why he sought to conceal that information from the public and why the U.S. won’t get control of the spread.

Meadows argued that the administration wouldn’t get the pandemic under control “because it is a contagious virus, just like the flu.”

Trump himself privately said in a February interview with journalist Bob Woodward that the virus might be five times deadlier than the flu. Eight months later, the president’s handling of that same virus is imperiling his reelection bid.

Covid-19 has now killed more than 224,000 people in the U.S. and infected more than 8.5 million Americans, including some inside the White House.

“It’s ripping through this country,” national security adviser Robert O’Brien, who recovered from the virus earlier this summer, told reporters outside the White House on Sunday. “But it’s also ripping through Europe in a way that it never has before.”

The latest round of infections comes after the president, first lady, their son Barron, advisers Hope Hicks and Stephen Miller and several other staffers tested positive earlier this month.

Almost 80 percent of Americans are somewhat or very concerned that they or someone they know will be infected with the coronavirus, according to an ABC News/Ipsos poll out on Sunday. And 61 percent of respondents disapprove of Trump’s handling of the pandemic (38 percent approve).

Meadows said he wished Short and any Americans who have contracted the virus well, but he declined to identify how many people in Pence’s office or the White House had tested positive or reported symptoms.

“We don’t give out that kind of information,” Meadows said.

The New York Times reported on Saturday that at least four members of Pence’s staff had tested positive in the past few days and that Meadows “had sought to keep news of the outbreak from becoming public.”

Trump was briefly hospitalized with the virus earlier this month but has since recovered and held a series of rallies per day, crisscrossing the country to rescue his flagging campaign. But masks are not required to attend the president’s crowded rallies, a stark contrast from the intimate, socially distant in-person and drive-in events Biden has. Polls show Trump trailing Biden in national and several battleground state surveys, including new surveys in Texas, Florida and North Carolina.

Pence will also continue to campaign, despite recommendations from the Centers for Disease Control and Prevention to quarantine for 14 days. But Meadows said the vice president, who the White House insists is an essential worker, will wear a mask.

“I spoke to the vice president last night at midnight, and I can tell you that what he’s doing is wearing a mask, socially distancing and when he goes up to speak, he will take the mask off, put it back on,” Meadows said. “He’s wearing a mask as it relates to this particular thing because the doctors have advised him to do that.”

Meadows said he had a commitment from McConnell to bring a coronavirus relief package to the floor if the administration reaches an agreement with House Speaker Nancy Pelosi (D-Calif.), though it appears unlikely a deal will pass before Election Day. And because of the price tag, Democrats will probably provide the bulk of the votes in the Senate.

The White House has identified the Senate Republicans most likely to support the deal, Meadows said. “But we’re not Nancy Pelosi,” he said. “We’re not going to vote or opine on a bill and pass it before we’ve read it.”

Meadows agreed that the pandemic is “very serious,” adding that the U.S. needs to make sure it has mitigation factors such as therapeutics, vaccines and other treatments to prevent deaths. He also said Americans, including the president, should “certainly” follow CDC guidelines, but when it comes to wearing masks at rallies, he said, it’s not mandated because “we live in a free society.”

“When we look at the number of cases increasing, what we have to do is make sure that we fight it with therapeutics and vaccines, take proper mitigation factors in terms of social distancing and masks when we can,” he said. “And when we look at this, we’re going to defeat it, Jake, because what we are, we’re Americans. We do that, and this president is leading while Joe Biden is sitting there suggesting that we’re going to mandate masks.”

“We’re never going to do that. You know, first and foremost, we are going to be looking out for public safety,” Bedingfield said. “We’ve done that from the outset of the pandemic. I think we have campaigned aggressively and creatively and safely, and you know, frankly, I think that’s what Americans are looking for.”

Andrew Desiderio and Marianne LeVine contributed to this report.

Can Donald Trump lose the popular vote and win the Election again?