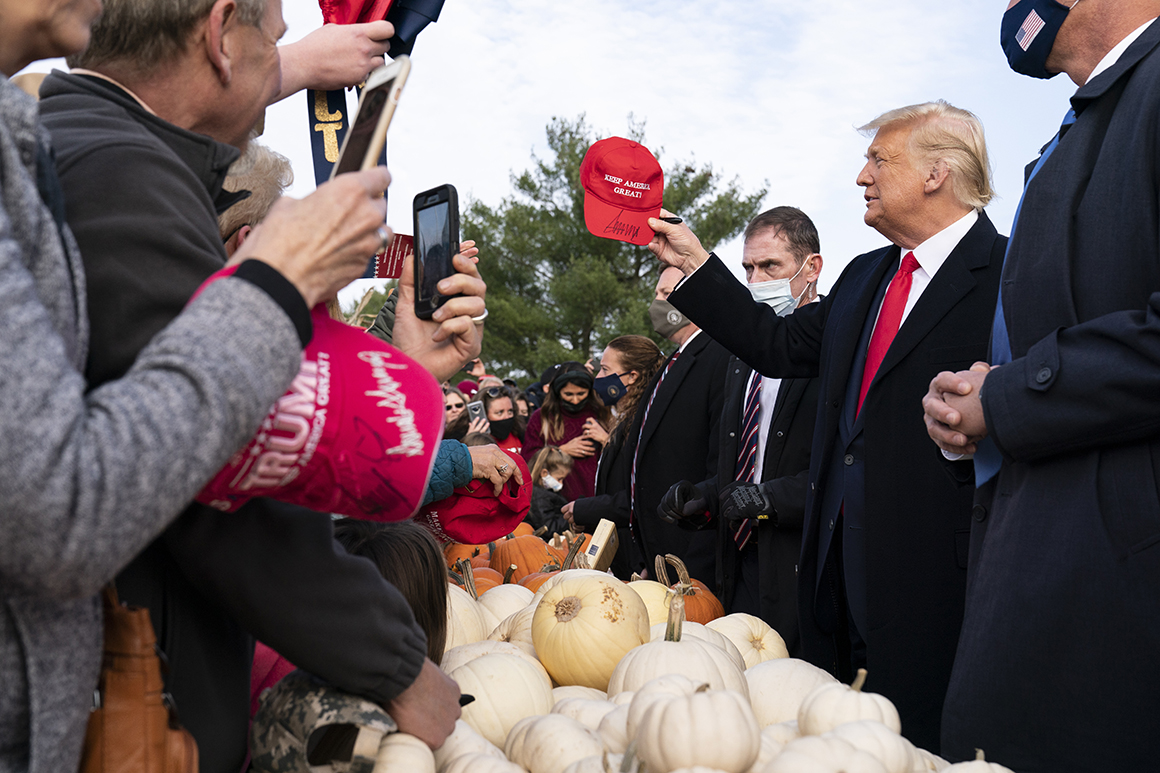 Trump’s response to the coronavirus outbreak — the most important issue to many voters — is likely to dominate the last week of the election as many Americans cast ballots during a global pandemic that has shuttered business and schools and decimated the economy. But even with polls showing Trump behind Biden, in part because of his handling of the pandemic, the president’s aides and advisers don’t expect him to recalibrate his message.

“We have been dealing with coronavirus since March,” said Sean Spicer, a former White House press secretary who remains close to the White House. “You’ve seen Trump’s handling of it. There’s nothing that has happened in the last 24 hours or that’s going to happen the next nine days is going to change anyone’s mind on this issue.”

On Sunday, the Trump administration even appeared to give up on controlling the spread of the virus altogether, after White House chief of staff Mark Meadows signaled as much.

“We’re not going to control the pandemic,” Meadows said earlier in the day on CNN. “We are gonna control the fact that we get vaccines, therapeutics and other mitigation.”

Biden, who argues Trump has forfeited his right to be president because he failed to take the virus seriously enough, immediately hit back in a strongly worded statement.

“This wasn’t a slip by Meadows,” he wrote. “It was a candid acknowledgement of what President Trump’s strategy has clearly been from the beginning of this crisis: to wave the white flag of defeat and hope that by ignoring it, the virus would simply go away.”

The U.S. hit a record number of new cases on Friday — 83,010 — as infections and hospitalizations climb across much of the country. Deaths are also beginning to rise again, to a seven-day average of almost 800 per day. In total, the U.S. has reported about 8.58 million infections, with the death toll at nearly 225,000.

But a Trump campaign official contended that Trump should not be judged on the number of cases, which are spiking everywhere in the world.

Even on Sunday, White House staffers were spotted without masks and Trump continues to hold massive rallies that flout state health guidelines.

“Until a vaccine, we take reasonable precautions and get back toward normalcy,” the official said on Sunday. “We won’t cower and let the virus dominate us. Joe Biden is a fear candidate, total submission — to the virus, and to China.”

Most polls show Trump lagging behind Biden in part because some Americans have lost confidence in the president’s handling of the coronavirus, the most important issue to many voters.

Five aides and allies to Pence, leader of the White House coronavirus task force, tested positive in recent days, including Marc Short, his chief of staff, on Saturday and Marty Obst, Pence’s top political aide, on Tuesday. Three of the staffers tested positive after already being in quarantine following close contact with Obst, according to a senior administration official.

“Nothing changes for the final nine days of this election,” said Bryan Lanza, a 2016 Trump campaign official who is close to the 2020 team. “It’s not like somebody hearing Pence’s team is infected is going to change any minds at this point. It’s baked in.”

The positive diagnoses in Pence’s orbit come just weeks after numerous other top White House aides were infected and Trump was hospitalized for Covid-19 treatment. More potential Covid cases inside the White House are expected in the coming days. A third person said the infection had spread through Pence’s office.

Short may not quarantine for long, according to one official, who described him as an “essential worker” who could return to work if he was feeling better before the suggested isolation period of 10 to 14 days. Pence’s office declined to answer more detailed questions about the other staffers who have tested positive.

Pence, whose staff said he’d tested negative on Sunday, will continue to headline campaign events as is allowed for essential workers, according to his office. He has changed the way he campaigns — wearing a mask more often, keeping his distance from attendees, skipping local media interviews and traveling with fewer people, according to two senior administration officials.

This puts Covid front and center in the final days of the campaign, one outsider Trump adviser said.

“You have highlighted the most important issue of this campaign and offered no solutions, no sensitivity and made Americans think you don’t get it,” the person said. “Not smart.”

On Sunday, Trump continued to talk about a litany of issues — from mocking Biden for not campaigning frequently, to his success in negotiating for an upgraded Air Force One — while campaigning in New Hampshire and Maine. When he did speak about the pandemic, he touted the administration’s successes and blamed the level of testing for the rise in cases.

“The president wants everyone to be safe and take precautions, but we cannot allow the coronavirus to drive us into the basement and lock the country down again,” said Tim Murtaugh, the Trump campaign’s communications director. “The president is the candidate who will continue to reopen the country and lead the ongoing comeback, while Joe Biden is the candidate of lockdowns.”

The campaign sent out talking points to surrogates on Sunday, obtained by POLITICO, that mentioned the pandemic only once — a lone reference to how many jobs that were lost during the outbreak have returned.

“We have to live our life,” said John Fredericks, a conservative radio host who serves on the Trump campaign’s advisory committee. “The president wants people to live their lives.”

10 Republicans Voted to Impeach Trump. The Backlash Has Been Swift.

THE ENTIRE 2020 PRESIDENTIAL ELETION WILL COME DOWN TO THIS…