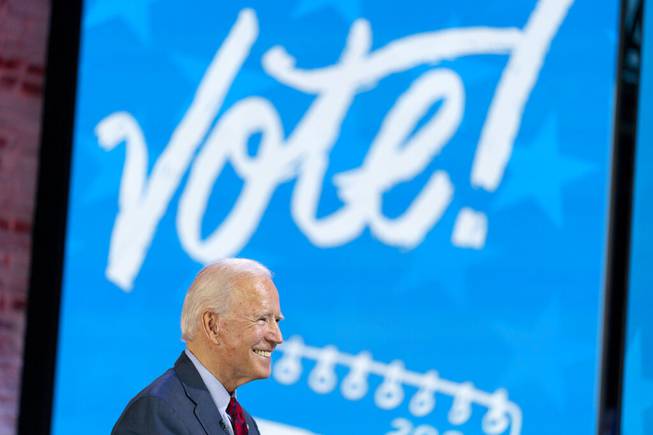 TAMPA, Fla. — President Donald Trump and Democratic rival Joe Biden are set to chase votes in Florida, a state all but essential to the Republican’s pathway to another term as both nominees turn their focus to encouraging voters to turn out on Election Day.

More than 73 million Americans have already voted, absentee or by mail, and Trump and Biden are trying to energize the millions more who will vote in person on Tuesday. While the Election Day vote traditionally favors Republicans and early votes tend toward Democrats, the coronavirus pandemic, which has killed more than 227,000 Americans, has injected new uncertainty about the makeup of the electorate.

Trump and Biden will appear in Tampa hours apart on Thursday, visiting the western end of the state’s Interstate 4 corridor, the area known for its rapid residential growth, sprawling suburbs and status as an ever-changing, hard-fought battleground during presidential elections.

The visit comes as Biden has framed his closing argument to voters on responsible management of the COVID-19 pandemic and Trump promises that the nation is on course to “vanquish the virus” even as it sets records for confirmed new infections.

“Even if I win, it’s going to take a lot of hard work to end this pandemic,” Biden said Wednesday during a speech in Wilmington, Delaware. “I do promise this: We will start on day one doing the right things.”

Trump spent Wednesday in Arizona, where relaxed rules on social distancing made staging big rallies easier. Thousands gathered in close proximity without wearing masks — a trend that was expected to continue through more than a dozen events in the final sprint to Election Day.

The pandemic’s consequences were escalating, with deaths climbing in 39 states and an average of 805 people dying daily nationwide — up from 714 two weeks ago. The sharp rise sent shockwaves through financial markets, causing the Dow Jones Industrial Average to drop 900-plus points.

Trump, who frequently lauds rising markets, failed to mention the decline on Wednesday. But he promised that economic growth figures for the summer quarter, due Thursday, would be strong, declaring during a rally in Bullhead City, Arizona, “This election is a choice between a Trump super-recovery and a Biden depression.”

Trump is betting on the GOP’s vast field and data operations, and efforts known as “poll flushing” — monitoring precinct lists for who has and has not yet voted — to provide a late boost of votes on Election Day. The Republican National Committee, which has more than 3,000 field staff and claims more than 2.5 million volunteers, will use that information to reach out to Trump supporters who have not voted throughout Election Day to ensure they get to the polls.

“We will continue our historic voter outreach efforts by knocking on over 4.5 million doors and making 15 million more calls to ensure voters turn out to the polls and vote for President Trump and Republicans up and down the ballot,” said party spokesperson Mandi Merritt.

Nowhere may those efforts be more important than in Florida. Without the battleground state’s 29 electoral votes, Trump’s path to victory is exceptionally difficult.

Trump is banking on local news coverage of his visit to overcome a substantial advertising deficit stemming from a late cash crunch. Biden and his allies are outspending Trump and his backers by more than 3-to-1 in Florida — about $23 million to about $7 million — in the final push to Election Day, according to data from ad tracking firm Kantar/CMAG.

In both Hillsborough County, which includes Tampa, and the adjacent Pinellas County, Democrats are crushing vote by mail. As of Wednesday morning, more than 53,000 Democrats had voted by mail in Hillsborough than Republicans. In Pinellas, the largest of the four counties in the state to switch from Obama to Trump in 2016, that number was just shy of 30,000 more Democrats voting by mail than Republicans.

Republicans in both counties have a slight edge in the state’s in-person early voting, which began last Saturday as Trump himself voted in Palm Beach County downstate, and the GOP will likely need a strong showing on Tuesday to overcome Democratic leads.

Because of concerns about submission deadlines, Postal Service backlogs and the potential for drawn-out legal challenges, Democrats are pressing their backers who have yet to return a ballot to head to the polls in person. Trump, meanwhile, is banking on enthusiasm among his Election Day supporters to overcome indicated Democratic strength in some early returns.

America is broken – can Biden and Harris put it back together? | Joe Biden

What will the Biden presidency mean to the Keystone state?